Posted by Dean Carder at 7:17 PM 3 comments: Links to this post

Just released..... Two weeks after the Hammond family lit a backfire to stop a wildfire (and now serving a second jail sentence for doing so) BLM crews spent two days lighting fires to burn off summer cattle feed and to destroy ranches. Home were burned, cattle were killed and injured and the crews had no regard for human safety.

This is when a couple of sniper teams were needed. This is pure hypocrisy and no one from the BLM has been charged, jailed or even held accountable for this despicable action. If anyone ever sees BLM crews taking part to run ranchers off of the property in this manner, stop, call your buddies and take fucking action. Smoke makes great cover.
http://www.westernjournalism.com/video-bundy-just-exposed-something-shocking-the-federal-govt-just-did-to-2-ranchers/?utm_source=Facebook&utm_medium=PostTopSharingButtons&utm_content=2016-01-05&utm_campaign=websitesharingbuttons

Posted by Dean Carder at 7:15 PM No comments: Links to this post

Well this is always a sad time of year...cleaning the blog roll. I have not been the best at posting on a regular basis for a while now but....... if ya aint posted in a year or so, see ya. Only post once in many, many months, so long. I really like all of these blogs but if they aint into it any more, not my problem. I will miss all of them.


In regards to the Oregon situation, Fuck all the libtards, mediajerks and ignorant reporters.

The father and son have been sentenced and served time once. Then the US fucking Government got a hair up their nasty asses and "resentenced" them. So, hell yes, take over some government shit. Show the idiots what the face of home grown terrorism looks like. Now I'm NOT saying the occupiers are terrorists. But the soon to be federal responders will be. Now Oregon is a far stretch for many Patriots, so.... when the lead starts flying in Oregon, let it fly in your own AO. Start your recon now. Get busy, cause fucking every body is tired of the government crap. Non-stop regulations, rules for us and not them, rigged trials, rigged investigations, murderous cops, outlaw federal organizations, Illegal taxation, domestic spying and do I have add an illegal alien in the fucking White House, not to mention the non-stop flood of other aliens and the importation of terrorists from Syria. God Dam, what fucking else do we have to take? The Illegal Alien in the White House is going make some announcement about guns this week. Well, fuck him! Ignore anything he institutes, get on with your life, do your thing just like you have been doing all along. Stand up like a man with a pair of balls and just fucking say NO!

In regard to the Hammonds, they did a prescribed burn and it got out of control but THEY put it out. Then a lightning storm started several fires the joined together to make a major fire. The Hammonds started a back burn to control the major fire. In fsct it worked so damn good it stopped the major fire. For doing this they were changed with arson, called terrorists and fined $400,000 dollars. For doing the right thing they are fined, sentenced, jailed, freed, jailed again and labeled terrorists. So if doing the Right thing, I do believe it time to do another right thing... correct the wrong things, however it must be done.
Posted by Dean Carder at 6:12 PM No comments: Links to this post 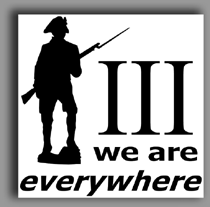